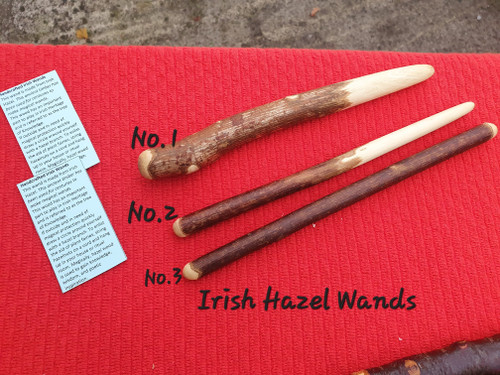 Handcrafted Irish Hazel Wand. This ancient timber has been used for centuries to make magical wands. This wood has an important part to play in Irish heritage and is referred to as the tree of knowledge. If outside and in need of magical protection quickly draw a circle around yourself with a hazel branch. To enlist the aid of plant fairies, string hazelnuts on a cord and hang up in your house or ritual room. Magically, hazel wood is used to gain knowledge, wisdom, and poetic inspiration.  The hazel’s connection with the Well of Wisdom is visibly recalled by the tree’s frequent presence at holy wells throughout Britain and Ireland, where pilgrims still continue to festoon its branches with votive offerings in the form of pieces of cloth.

The hazel’s association with wisdom extends to other cultures of the ancient world. In Norse mythology it was known as the Tree of Knowledge and was sacred to Thor; the Romans held it sacred to Mercury, who – especially in his Greek form, Hermes – was the personification of intelligence. Hermes’ magic rod may have been made from hazel. The English word derives from the Anglo Saxon ‘haesl’ which originally signified a baton of authority.

The wand shown is the actual wand you will receive. Handcrafted in the Irish Midlands from a natural fallen branch.