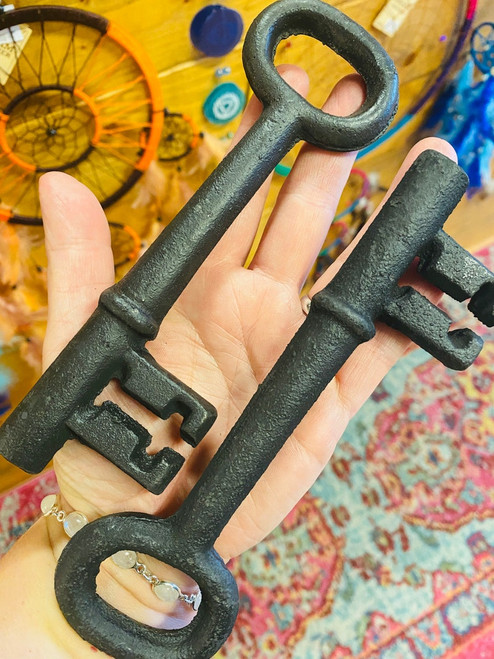 Keys have been an important part of magic and folklore for centuries. Traditionally placed above the door in ones home to repel negative energy. Linked to the Goddess Hecate, magic, moon, witchcraft, also known as Hecate's key, used to wrap oneself in magic prior to working.  Keys symbolize knowledge, success, passage, new opportunities.

When we look back in history we see that some goddesses and gods are known as key-bearers and we often see this depicted in descriptions and art as we see them wearing keys on their belts and also around their necks. This is important as they are known for opening pathways for those of us who work with them.  Hecate is probably the most well known, an ancient Greek goddess of witchcraft, know to be connected to the life-death cycle and the crossroads. She is known by her followers as the lady who opens portals to the spirit worlds.

Keys to the ancient Norse people was a symbol of female power, some women would wear keys on their belts along with knives, they held the keys to the homestead which was an honor.  In medieval times the blacksmiths were looked upon as magical folk as they worked with iron, a metal that would protect and guard peoples against evil energy and spirits, locks and keys have been around for about 4,000 years and carry a deep magical significance!

Our large keys can be placed above the doorway of the home, a symbol of protection, or upon ones altar or anywhere you feel the need.