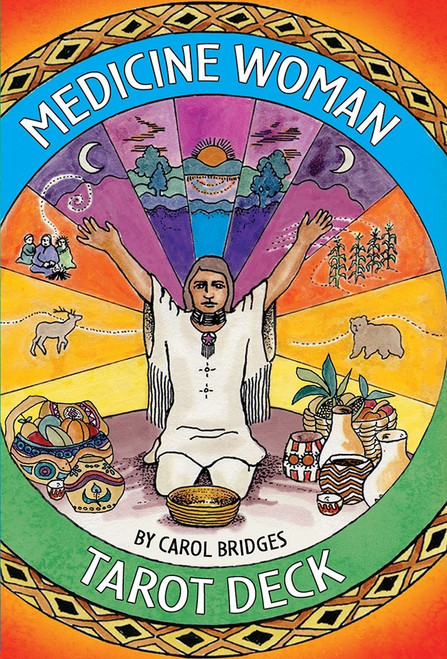 "The Medicine Woman Tarot honors Mother Earth and respects all beings, embodied and in spirit. It guides through the seasons and the powers, which they provide to all who live in earth’s embrace. Seventy-eight positive images depict the feminine strength in both men and women."

-- Introduction to The Medicine Woman Tarot Deck by Carol Bridges

In this 78-card deck the 22 Major Arcana, referred to as the Great Mystery, depict a path of life, starting from the Seed/Fool card and completing with the Dancer/World card. In the Minor Arcana the four suits are Stones (coins), Pipes (wands), Arrows (swords), and Bowls (cups). The four cards that correspond to the traditional court cards are: apprentice (page), totem (knight), lodge (queen), and exemplar (king). Medicine Woman Tarot guides you along your path toward self-creation.

About Carol Bridges
At an early age Carol developed a rich inner world and creative life. She studied psychology, women's issues, and art at the University of Iowa. She discovered her spiritual lineage to be grounded in the native harmony of the land. Carol now teaches ceremonial classes and workshops through the Church of the earth in Southern Indiana. She is sacred teacher at Sun bear's Medicine Wheel Gatherings. She is the author of many articles and books on spirituality. She is also the author of The Medicine Woman Inner Guidebook.

Flowers of the Night Oracle