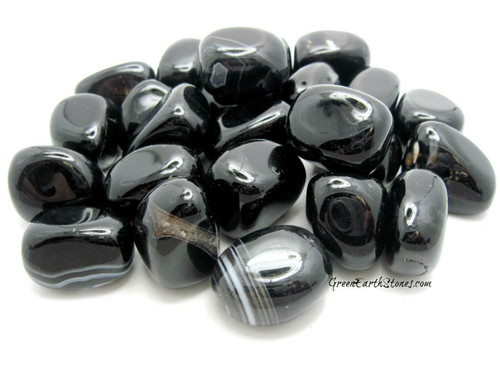 Beautiful premium Black Agate tumbled stones, the photo shown is of the actual stock for sale. Some stone have banding while others do not. Love love love these stones, they are chunky and perfectly smooth.

In History: We can look back in history and see how popular this lovely stone was, it is believed to be one of the first stones used by man dating back to the Stone Age. From this era we find spear and arrow tips found in grave areas and we know that Egyptians were mining Agate as early as 3500 B.C. Early Sumerians created cylinder seals, beads, signet rings and other ornamental objects. Roman tradition states a wrestler who wears Agate is invincible! Medieval texts often talk about Agate being used in medicinal preparations and created into talismans, the historical uses of Agates throughout the ages is massive!